Garden compost is nutrient rich and acts as a slow release plant fertilizer. It provides plants with the three main nutrients – nitrogen, potassium and phosphorus. It also contains other nutrients and trace elements which are essential for healthy plant growth. However, growing plants in just compost can trigger soft sappy growth, as the compost is too nutrient rich, resulting in plants more prone to pest and disease in the long term.  Generally, direct seeding into compost is not recommended due to the speed with which it may dry and the possible presence of phytotoxins that can inhibit germination, and the possible tie up of nitrogen by incompletely decomposed lignin. Blend 20–30% compost for transplanting seedlings.

Aerobic bacteria manage the chemical process in compost by converting the inputs into heat, carbon dioxide and ammonium. The ammonium is converted by bacteria into plant-nourishing nitrites and nitrates.

Composting as a recognized practice dates to at least the early Roman Empire since Pliny the Elder (AD 23-79). The first industrial station for the transformation of urban organic materials into compost was set up in Wels/Austria in the year 1921.

o        High nitrogen materials tend to be green (or colorful, such as fruits and vegetables) and wet.

Compost can be a soil amendment, mulch, potting mix, or tea.

It’s good to apply during the early phases of growth, not in concentration after harvests begin; not directly into soil in heat of summer (it’s best to use as dressing in midsummer). For fall growth of lawn, good time to add compost on top as slow release food to help build roots.  Same with plants that will overwinter.

These common items can be added to compost:

Organic matter is the measure of carbon based materials in the compost. High quality compost will usually have a minimum of 50% organic content based on dry weight. Although fine textured compost is preferred, excessive dust can cause difficulties in handling and can indicate low organic content.

The most efficient composting occurs with a carbon: nitrogen mix of about 30 to 1. Fresh grass clippings have an average ratio of about 15 to 1 and dry autumn leaves about 50 to 1 depending on species. Mixing equal parts by volume approximates the ideal C: N range.

The pH scale ranges from 0 to 14 with a pH of 7 indicating neutrality. Most compost has a pH between 6 and 8. Products derived from wood residuals or peat moss can have pH values as low as 4.5, while manures are

frequently alkaline (pH 8.0-8.5). Since specific plant species sometimes prefer a specific pH range, knowledge of both soil and compost pH can be important. pH can be adjusted through the use of lime (to increase pH) and sulfur or iron sulfate (to decrease pH).

Moisture content based on weight should be between 35% and 60%.

Stable compost consumes almost no nitrogen or oxygen and generates little carbon dioxide or heat. Mature compost has a dark brown to black color and a soil-like or musty odor. Compost that has a sour or putrid smell should not be used. If the compost is very hot (120F) or if the pile becomes very hot after rewetting, the product is not stable.

The optimum compost application rate will vary depending on soil conditions, compost characteristics, and the type of landscape planting. When amending poor soils that are low in organic content, typical compost rates will be three to six cubic yards per 1,000 square feet. This corresponds to a 1-2 inch layer which is then incorporated to an approximate depth of 4-6 inches. This results in an inclusion rate of 20-30% compost by volume.

Physical characteristics suggestive of maturity include: 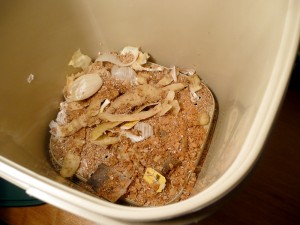 Inside a recently started Bokashi bin. The aerated base is just visible through the food scraps and Bokashi bran.

Bokashi is a method of intensive composting. It can use an aerobic or anaerobic inoculation to produce the compost. Once a starter culture is made, it can be used to extend the culture indefinitely, like yoghurt culture. Since the popular introduction of effective microorganisms (EM), Bokashi is commonly made with only molasses, water, EM, and wheat bran.

In home composting applications, kitchen waste is placed into a container that can be sealed with an air-tight lid. These scraps are then inoculated with a Bokashi EM mix. This usually takes the form of a carrier, such as rice hulls, wheat bran, or sawdust that has been inoculated with composting micro-organisms. The EM are natural lactic acid bacteria, yeast, and phototrophic bacteria that act as a microbe community within the kitchen scraps, fermenting and accelerating breakdown of the organic matter. The user would place alternating layers of food scraps and Bokashi mix until the container is full. Liquid “compost tea” is drained once or twice a week and can be diluted 1:100 and added to plants as fertilizer, or poured directly down drains to help clean them.[17] Once the container is full, it is left to ferment for an additional 2 weeks in the container, and then buried under 6-8 inches of soil, in ground or in a non-reactive container. After another two weeks buried under soil, the food scraps should be broken down into rich compost.

Compost tea is a liquid solution or suspension made by steeping compost in water. It is used as both a fertilizer and in attempts to prevent plant diseases.[18] The liquid is applied as a spray to non-edible plant parts such as seedlings, or as a soil-drench (root dip), or as a surface spray to reduce incidence of harmful phytopathogenic fungi in the phyllosphere. Totally Green produces the ORCA Green Machine which allows governments, universities and commercial institutions to employ this aerobic method of composting to presorted organic waste.

The practice of making raised beds filled with rotting wood. It is in effect creating a Nurse log, however, covered with dirt. The buried decomposing wood will give off heat, as all compost does, for several years. This effect has been used by Sepp Holzer for one to allow fruit trees to survive at otherwise inhospitable temperatures and altitudes.

“Humanure” is a neologism designating human excrement (faeces and urine) that is recycled via composting for agricultural or other purposes. The term was popularized in a 1994 book by Joseph Jenkins  that advocates the use of this organic soil amendment.

Humanure is not traditional sewage that has been processed by waste-treatment facilities, which may include waste from industrial and other sources; rather, it is the combination of faeces and urine with paper and additional carbon material (such as sawdust). A humanure system, such as a composting toilet, does not require water or electricity, and when properly managed does not smell.

By disposing of faeces and urine through composting, the nutrients contained in them are returned to the soil. This aids in preventing soil degradation. Human faecal matter and urine have high percentages of nitrogen, phosphorus, potassium, carbon, and calcium. It is equal to many fertilizers and manures purchased in garden stores. Humanure aids in the conservation of fresh water by avoiding the usage of potable water required by the typical flush toilet. It further prevents the pollution of ground water by controlling the faecal matter decomposition before entering the system. When properly managed, there should be no ground contamination from leachate.

As a substitute for a flush water process, it reduces the energy consumption and, hence, greenhouse gas emissions associated with the transportation and processing of water and waste water.

Humanure may be deemed safe for humans to use on crops if handled in accordance with local health regulations, and composted properly. This means that thermophilic decomposition of the humanure must heat it sufficiently to destroy harmful pathogens, or enough time must have elapsed since fresh material was added that biological activity has killed any pathogens. To be safe for crops, a curing stage is often needed to allow a second mesophilic phase to reduce potential phytotoxins.

Humanure is different from night soil, which is raw human waste spread on crops. While aiding the return of nutrients in faecal matter to the soil, it can carry and spread a vast number of human pathogens. Humanure kills these pathogens both by the extreme heat of the composting and the extended amount of time (1 to 2 years) that it is allowed to decompose.

Vermicompost is the product of composting utilizing various species of worms, usually red wigglers, white worms, and earthworms to create a heterogeneous mixture of decomposing vegetable or food waste (not to include meat, dairy, fats, or oils), bedding materials, and vermicast. Vermicast, also known as worm castings, worm humus or worm manure, is the end-product of the breakdown of organic matter by species of earthworm. This type of composting is sometimes suggested as a feasible indoor composting method

Vermicompost tea has been shown to cause a 173.5% increase in plant growth by mass over plants grown without castings. These results were seen with only 10% addition of castings to produce these results.