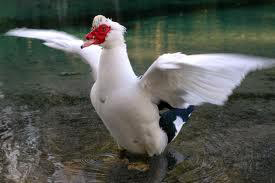 As most of you know, I have adopted all the Mills Pond geese and the last two roundups of the Muscovy ducks. For all of those who have inquired, this is an update on their health in their new home.

All the geese are doing well, are healthy, and have gained weight.  Baby G is happy to be with his parents; and his uncle, named Fred, has picked a mate, Wilma, and spends his day protecting her and her nest.  Wilma has had two goslings hatch (Pebbles and Bam Bam), and she is still sitting on her nest, waiting for a couple more which should be hatching soon.  In total, we have had 9 goslings born this spring. Most of the geese have finished laying eggs for the season and are spending mornings and evenings swimming in gaggles (groups) in the ponds.  During the heat of the day, they stay in the shade, surrounded by chickens, guineas, turkeys, ducks, and the other geese nibbling on grains and greens, or napping.

We all loved to treat our waterfowl at Mills Pond, but most of the human foods fed to Muscovy ducks compromised their health. The rule of thumb is anything we call junk food or a “treat” for a human is not good for ducks.  Ducks’ systems are very different than ours and can’t rebound quickly like we can from a sugary unbalanced diet.  Most of the Muscovy ducks adopted were unhealthy eaters, significantly underweight, and several had deformities and illnesses. 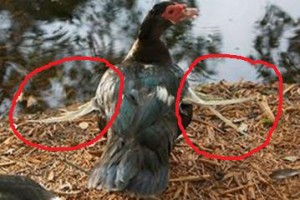 As you have seen before the relocation effort, several of the ducks suffer from Angel wing.  This is caused by overfeeding ducks too much processed sugars and carbohydrates at young ages. Waterfowl should never be fed bread, popcorn, or other human junk food. As birds grow, the wrist joints become stunted in their development relative to the rest of the wing. The result is a wrist which is twisted outwards and the duck is unable to fly, with feathers that are out of alignment resulting in wings at odd angles.

Several others suffer from Aspergillosis, which occurs when ducks inhale spores produced by the mold that grows on bread, corn, damp straw, or other feed. These inhaled spores cause multiple nodules or plaques in the lungs and air sacs.

And lastly, most of the ducks were suffering from Avian Cholera or fowl cholera and all the Mills Pond fowl have been treated with antibiotics as a precautionary measure. This disease is associated with poor sanitation and standing water. Some of the symptoms included loss of appetite, mucous discharge from the mouth, runny eyes, diarrhea, and labored breathing, and was especially noticeable in several male ducks. I found white lesions and “crispy” livers in the three birds that passed away. 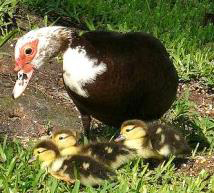 Teaching the ducks to eat a healthy diet of various grains, supplemented with fresh vegetables, fruit, and other table scraps along with cottage cheese and hard boiled eggs, has been a real challenge, but we’ve made great progress.  My five year old son, Cole, aka the little duck whisperer, has created a special bond with the Muscovies and they seem to think he is their leader.  He hand-feeds them nutritional supplements, gives them clean water several times a day with the help of his grandfather, and has been a tremendous help acclimating them, including his occasional “trip and fall” into the big pond. 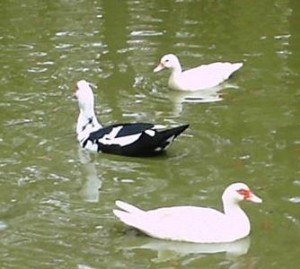 Although the Mills Pond geese fell in line with the routine, the Muscovy ducks weren’t used to the elaborate housing like my own fowl. They are all free roaming, swim during the day, and rest in the trees, but countless times I have been spooked by the ducks in trees and grass in the darkness. Finally, most have learned to follow the others back from the ponds and high grass areas at dusk, into their covered pens to keep them safe from night predators.  And like us, a good night’s sleep is crucial in their health and longevity.